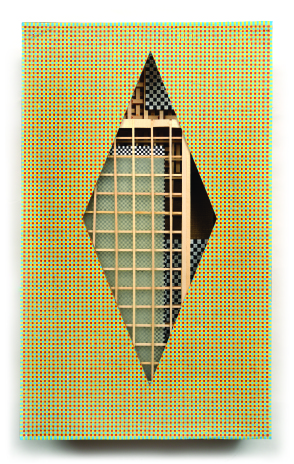 In addition to paintings that exist as discrete objects, over the last two years I have begun creating paintings that are made as insertions in specific architectural spaces. I create optically active paintings on canvas, modified or interrupted by physical displacements, dissections, insertions or reversals. Paintings are visual objects. Usually we think of the ‘object’ part as supporting the ‘visual’, of the wooden stretcher and canvas as just being there to hold up the image that we are meant to see. But my paintings usually involve a smaller or larger interruption of such a relationship. I am working with the space created when the parts of painting are dislodged from their usual roles.

Ken Weathersby‘s paintings were seen in a 2010 solo exhibition, Perfect Mismatch at Pierogi Gallery in Brooklyn. His works were also recently on view in The National Academy of Art Museum’s 183rd Annual: An Invitational Exhibition of Contemporary American Art in New York, in the exhibition Continuing Color Abstraction at The Painting Center in New York, in Postconceptualism at Moderno in Washington, DC, and in Visual Phrasing at Maloney Art Gallery at the College of St. Elizabeth. He is the recipient of a Mid-Atlantic Arts / New Jersey State Council on the Arts Fellowship in Painting. Weathersby grew up on the gulf coast of Mississippi. He received an MFA in Painting from Cranbrook Academy of Art in Detroit and has lived in or near New York City since 1990.