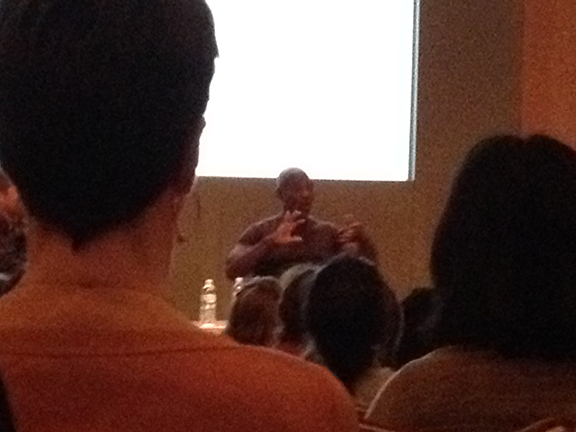 The difficulty of finding and not losing one’s voice as an artist is not new.  Compounded in our time of multiple and simultaneous disciplines and modalities, this condition can reach a critical level.   Perhaps it is a defining condition of the contemporary creative spirit. Perhaps it is a malady. In any case, I find myself often being one of those artists who experiences some level of this condition -this difficulty in keeping one’s creative voice, possessing the unshakable confidence in it, therefore nurturing it, and defending it.

But last Wed, September 10th, at a book launch and discussion at the New York Public Library’s Scwarzman building, there was a moment addressing this condition.

On that evening artist, performer, educator and fashion collaborator Nick Cave discussed his new book Epitome with Nato Thompson, Chief Curator of Creative Time and contributing author.  The book is a monograph and survey of Cave’s work -an oeuvre that cannot be pinned down by one specific genre. His unique Soundsuits, installation work, sculpture and public performances (such as Heard NY) are all circumstances he employs in order to transport the viewer (and perhaps also himself and fellow performers) into an imagined space of the fantastic and magical.  It was also occasion for Cave to be asked by Thompson about any childhood experiences that may have provided the foundation of -in Thompson’s words-  “the mass spectacle parade culture” aspect of some of Cave’s performance work.  Cave also talked about his current exhibit  Made By Whites For Whites at Jack Shainman Gallery, which is more haunting, less playful, and more politically charged with racial narratives. And lastly he spoke of his work as an educator at the Fashion Department at the Art Institute of Chicago.

The first time I came across the work of Nick Cave had been in the context of fashion –in the September 2010 issue of US Vogue magazine, in a fashion accessories editorial photographed by Raymond Meier, and where Cave was in some of his Soundsuits, clutching, tossing, looking at (perhaps playing is the more appropriate word) a pricey high end fashion accessory such as an Yves Saint-Laurent fox-and-suede shoulder bag, or a singular Pierre Hardy marmot-and-calfskin boot (the latter he appears to be tossing like a ball in mid-air). It was an extraordinary shoot: playful and fantastic, and at the same time eliciting questions of artists’ principles when they link their work to, or place it in a kind of light that sets stage to, promotes and consents to the rampant consumerism of luxuries in our unsustainable commodity culture.

The bias that held me is that any encounter with Nick Cave’s work after that has always been colored and touched by that Vogue magazine story.

But at the end of the talk came that pivotal moment that addressed that bias, and at the same time answered my own questions about my own work. Somebody at the audience asked Cave where he locates his work, or where does he stand as an artist: Is it in the public performance work? Is it in the Soundsuits? Is it in the more static painting and sculptural installation work currently on display at Jack Shainman Gallery? Is it in his collaborative work in both performance and fashion photo-editorial? Or is it in his work as an educator?

Cave simply replied, “It is in conviction.” 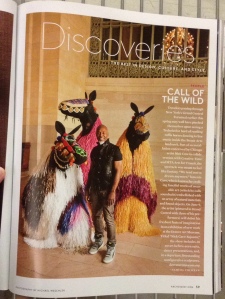 One thought on “encountering Nick Cave”