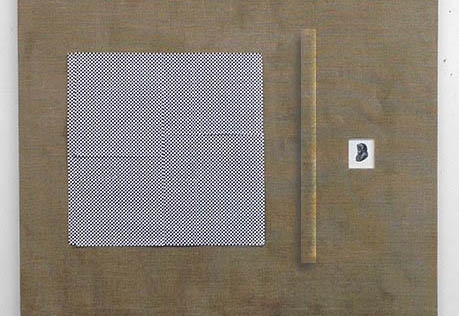 I noted these two dreams immediately after waking. Both seem tied to what’s been going on in the studio:

Walking around in a landscape that was buildings and sidewalks and little areas of grass, the point seemed to be deliberately and repeatedly disappearing into the most obscure no-place places. Going past a room where I apparently lived, climbing a set of outdoor stairs to go repeatedly down a forgotten twisty hall full of mops and things. Someone was following and watching me do this / individuals were following and watching others do this. Then there were pictures of this. I was making some and we were talking about them. They all had a door way in them that went somewhere like these obscure walks seemed to want to go, off the canvas, off the page, out of the picture. Some people were saying things and it came up (did someone say it or did I just think it?): don’t show the doorway, it’s an extra thing and doesn’t have to be seen. Then there was a simpler one in front of me like that. An image of some guy, on the left, and he was looking behind some big thing toward something we couldn’t see. Simpler like that. Linda Francis was there and thought that was better.

A friend told us that in the video he was “headed for the falls”. Then we were watching it and it wasn’t what we had expected. He was in a tiny boat and it was night and behind him in the distance was a huge wall of water crashing down from above over stones. (Our assumption was that he meant going over the falls from the top, like going over a cliff, not going into the falls from below). He got closer and closer. It was dark but there were bright lights somewhere and they were flashing around, glinting off everything. The sparkling light reminded me of a certain Katherine Bradford painting that is like a hallucination of ships at night that almost become strange figures. He was closer and closer to the falls, but he was intently staring at a little stone sculpture across from him in the boat with it’s back to us. Was it a little Buddha or something other? Behind him, as he got closer I could see the falls, a huge wall of stone lions going up and up and up. The roar from the waters pouring over them had to be deafening, and I suspected this thing must be staged– how could he not hear that? Just as he was reaching the base of the falls, when I was sure he would be swamped and maybe drowned, there was a cut to him standing up in the boat and holding his arms up in triumph as he floated off down a stream we couldn’t see before, brightly lit with the sunshine of a clear dawn.
Just then my alarm went off.