The oldest tube of paint in my oil paint box is Black Roman Earth by Williamsburg Paints before it was bought by Golden Paint Company in 2010. My guess is I had this tube since 2007 or 2008. The reason it has been rarely used by me is because its consistency is very grainy, much more like peat, moist earth, cryoconite, and wet charcoal bits (see photo below).

But it is this paint’s very resistance to my using it is what gives it a very privileged status in my studio: that is the paint that is old, is not being used, and therefore its presence is like a watcher, sentinel or chronicler of what is being made and unmade in the studio.  It’s name evokes authority from its origins from antiquity, and it holds justification.  It harks back to the pigment used in frescoes by ancient Roman artists. But even older than that is the origins of one of pigment’s ingredients, which is Manganese Oxide (also known as pyrolusite).  A rare form of this oxide – called Haumannite- was found by French scientists in the 2000’s in the sample taken from the snout of the Great Bull in the paintings in Lascaux Caves.  What baffled them is that the process of making hausmannite requires temperatures of around 1650 degrees Fahrenheit which brings the question how could have prehistoric people generated that kind of heat from their open-pit fires (source).

Therefore it feels like I am losing a studio companion when I decided to finally use this pigment as the subject of this painting series that I am working on in my studio. But perhaps “losing” is too nihilist a description. Transformation sounds more positive.

The objective for the series is to make paintings mostly with this Black Roman Earth paint within the framework of the its ancient and prehistoric origins just mentioned, and how its past use can speak to us (or the ways it is still spoken through art) in our present times.  And so when I think of the relevance of this form of visualizing, what always comes to my mind is this statement by Gilles Deleuze in an interview with Toni Negri in 1990, titled Control and Becoming. He said (boxed in pencil below): 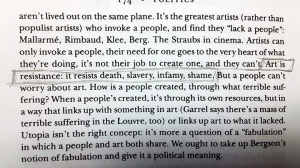 Since learning about this text and statement in graduate school, it has become part of my “point zero” repository of motivations and other baseline values when it comes to problems and questions of relevance, necessity, any irony, any analogies, any truths or justice that are all either sources or intentions in anything that I make and think of in the studio.

So for the series I decided to make paintings out of each of the 4 words Deleuze said that art is resisting to:

With these 4 words, I wondered if there would be one word that would be synonymous to all of them. When I did an online definition search for it, the word that came up is “silence.”  It would therefore sound that Deleuze is stating that art is a resistance against silence.  But there are those who would argue that silence is a form of resistance itself.  This contradiction is a foundation for this series.

Death – the image for the painting is taken from the book The Sight of Death by TJ Clark. In the book he writes what he re-sees and rediscovers after revisiting 2 particular paintings by French Baroque painter Nicolas Poussin,in the Getty Museum in the course of 6 months.  The exact image -which is also the book’s cover image- is from the look of horror in a figure in the painting,  Landscape with a Man Killed by a Snake (1648).

Slavery – the idea and the condition in its insidious form is what I’m thinking of in the making of this painting. What can best describe my intentions for it is what Terry Smith wrote in the introduction of “Impossible Presence: Surface and the Screen in the Photogenic Era”(2001). In it, he questions why is it that the visual image in our present times has lost its power to communicate concentrated meaning.  The same paragraph also contained the answer: acceleration.

Shame – the final painting for the series returns to Deleuze in the same interview, in the instance that he speaks of shame. He said:

“I was struck by all the passages in Primo Levy where he explains that Nazi camps have given us ‘a shame at being human.’ Not, he says, that we’re responsible for Nazism, as some would have us believe, but that we’ve all been tainted by it: even the survivors of the camps had to make compromises with it, if only to survive. There’s a shame of there being men who became Nazis; the shame of being unable, not seeing how, to stop it; the shame of having compromised with it; there’s the whole of what Levi calles this ‘gray area.’ And we can feel shame at being human in utterly trivial situations too: in the face of too great a vulgarization of thinking, in the face of TV entertainment, or a ministerial speech, of ‘jolly people’ gossiping. This is one of the most powerful incentives toward philosophy, and it’s what makes all philosophy political…”

The image for the painting come from a still from a film of the same title, where the film subject’s sister sings “New York, New York’ in a nightclub.