Grey’s Anatomy actor Jesse Williams just recently delivered a profound speech at the 2016 BET Awards, focusing on the violence and injustices inflicted upon the black community, which significantly shook and moved the audience, resulting in a standing ovation.

“Now, what we’ve been doing is looking at the data and we know that police somehow manage to de escalate, disarm and not kill white people everyday. So what’s going to happen is we are going to have equal rights and justice in our own country or we will restructure their function and ours….

We’ve been floating this country on credit for centuries, yo, and we’re done watching and waiting while this invention called whiteness uses and abuses us, burying black people out of sight and out of mind while extracting our culture, our dollars, our entertainment like oil – black gold, ghettoizing and demeaning our creations then stealing them, gentrifying our genius and then trying us on like costumes before discarding our bodies like rinds of strange fruit. The thing is though… the thing is that just because we’re magic doesn’t mean we’re not real.”

Focusing on the injustices of police brutality, the nature of inequality that continues to exist today between the white and black community, and the way black culture is often abused and utilized for others’ benefit, Williams’ speech was more of a compelling poem infused with frustration rather than a conventional speech that included the thanking of multiple people or organizations that helped him receive this humanitarian award. Poetic, powerful, and political, his speech received a lot of recognition and praise, especially on Twitter and Facebook.

Though advocacy for racial justice has been in practice for the past hundreds of years, the shootings and police brutality inflicted upon many innocent black people in America has really developed and fueled different types of movements and protests in the past couple of years, such as the Black Lives Matter Movement. Language and art has always been utilized as outlets for change and political standpoints, and Gallery Aferro is proud to be representing and nurturing a past resident artist Jerry Gant, an extremely respected and valued artist in the Newark community, who is also an advocate of racial equality and justice which are apparent in his works and artistic creations. A visual artist and performance poet, Jerry Gant has delivered TED Talks about “detoxing the ghetto,” and has been interviewed along with Evonne Davis by NBC New York on national television about his exhibition, Unusual Suspects, an artistic meditation of the black male image in America.

Jerry Gant also shared some of this thoughts on the concept of words being weapons in a brief interview about the Pink Dragon Pop-Up at the  2nd Annual East Orange MACFest Music, Art & Culture festival, which was held at the City Hall Plaza on Saturday, June 4, 2016. You can visit the Pink Dragon Artist Syndicate’s facebook page to learn more about their mission to utilize art, culture, and fashion to create positive change in the world. 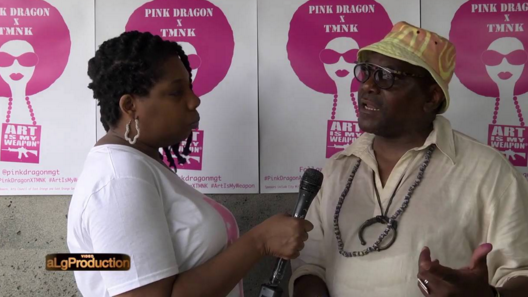 Though we are not close to fixing the problem, language, poetry, and art has generated political and social change, and is really altering the way people view and perceive the black community. Artists like Jerry Gant has an abundant amount of power and skills that he can utilize to create revolution and validate the equality of black and white. We all possess the ability to create change and use our words and use our creativity to advocate racial equality and justice.

The recent murders of Alton Sterling and Philando Castile has ignited public outrage and demands for justice, and the political movements for racial equality has been as intense and powerful as ever. Innocent names continue to be added to the long list of black people executed by the police. The public is furious and devastated, expressing their outrage on social media. Graphic footage of the police officers shooting and murdering Sterling and Castile was distributed like wildfire throughout Facebook and Twitter. Many people shared their thoughts using words, art, and poetry, in attempts to educate others as well as create dialogue about black lives and the repetitive murders of the black community.

I am not black and I cannot speak for the black community, but what I can do is be vocal about the black lives matter movement and begin a dialogue. My job is to educate myself as well as others.  To all the non black people who celebrate black culture, black excellence, and black beauty, but are staying silent about the recent murders; please check your privilege, acknowledge your privilege, and stop being in love with your privilege.  Do not stay silent. Be disturbed and outraged, and utilize your creativity and language to create change.

Deborah Lee is a curatorial intern at Gallery Aferro who is currently attending Rutgers University as an Art History and Communications dual major along with a Women’s and Gender Studies minor. Lee is also an undergraduate assistant at the Center for Women in the Arts and Humanities and is part of the Institute for Women’s Leadership program. Aside from her immense involvement on campus, Lee enjoys blogging, being a social media fanatic, experimenting with makeup, and singing/creating music.