Thinking about a particular visual arrangement.

“2001: a Space Odyssey”, 1968, dir., Stanley Kubrick. An image at the beginning of the film shows a troop of apes/early humans encountering a strange object, “the monolith”. The monolith resembles the work of California sculptor, John McCracken. The monolith is an inorganic, technological thing, an artificial thing, an unnatural thing, i.e., art.

The film wants to explore a teleological idea of human drive. They (the ape-humans) represent the human organism looking at something it can’t understand, a mystery that drives it. It is transfixed by the grip of something compelling yet alien.

Rogier van der Weyden Crucifixion Diptych c. 1460 (at Philadelphia Museum of Art)– Kubrick repeats a pattern found in this painting. Teleological drive is expressed in a primal encounter with something human, yet unnatural / supernatural, unassimilable. Kubrick brings it into a context that includes human biological evolution on one end and technological exploration on the other and proposes that as part of a single mystical flow. Kubrick’s is a hybrid of modernist materialism and a recuperated religiosity. It is a re-staging and a continuation of this type of religious iconography. 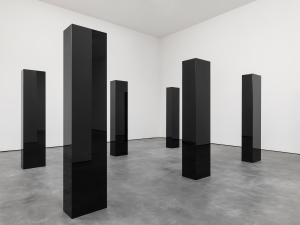