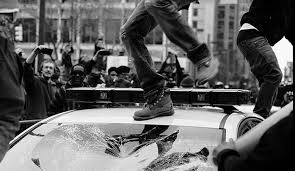 On July 22nd, 2017 Gallery Aferro hosted a film screening of Marylou and Jerome Bongiorno’s Revolution ’67 America Reframed. The film was moderated by Kiyan Williams, an artist and Newark native. 2017 marks the fiftieth anniversary of what became known as the Newark Riots. The title of the film alone is cause for reflection. The film makers aptly chose to refer to this tumultuous event as a revolution.

The film highlights the racial tensions and socio economic factors that contributed to a revolution that left twenty six people dead and hundreds injured. Instantly, the film made me reflect on the rebellion that took place in Baltimore in 2015. A rebellion sparked by the murder of Freddie Gray at the hands of Baltimore city police.

I was a senior at Morgan Sate University, a historically Black College in Baltimore.  By senior year I had been to my fair share of protests. Things were silent for a few days after his death. However, on April 25th, 2015, the day of Gray’s funeral, the Rebellion began.

There was talk of the rebellion hours before it began; however, I didn’t think much of it. I was sitting in the tutoring center where I worked on campus when I received a phone call from my father. “Are you out there throwing bricks?” He asked me. “What?” I asked. He told me that he was watching the news and teenagers were throwing bricks at police officers who were retreating. My father was in New Jersey. I couldn’t believe that the potential “riot” that I heard about earlier was making national news.

I quickly streamed CNN on the large computer screen I sat in front of and before long everyone was gathered around me watching local teenagers jump on top of police cars as if they were trampolines. No one could believe it. I was less than twenty minutes away from it all and yet I was watching it transpire on TV like millions of people across America. It was surreal.

“You have your Dashiki on, why don’t you get out there with them,” someone asked me jokingly. A part of me wanted to join them. I’m sure to a lot people what was happening was deplorable but a part of me felt a since of pride. The rebellion started with teenagers. These children had left school, organized and decided to take a stand. I thought that was beautiful.

The days that followed felt like weeks, as the city of Baltimore was given a curfew and anyone who went outside after curfew could be arrested. I watched tanks drive by during the day as if I were in a war zone. Classes were canceled and the weight of what was occurring felt astronomical.

I can’t help but think these feelings were similar to how the people of Newark felt in 1967, when the beating of a black taxi driver, after a traffic infraction, ignited the city.