Almost exactly three years ago today I had lunch with George Ortman at MoMA.

George was the head of painting at Cranbrook Academy of Art when I was there as a graduate student at the end of the 80s. He had been an important artist, near the heart of certain things happening in NYC in the 1960s and 70s. His object-oriented approach to painting was pivotal for Donald Judd and the turn to minimalism, but George’s work remained singular and complicated, never quite associated with a style in ascendancy. He was always searching. Leaving NYC to teach at Cranbrook in Detroit probably made him more of an outsider for a couple of decades, though he returned to New York in the 90s and had glowingly-reviewed shows of both early and new work with Mitchell Algus Gallery in the 2000s.

After seeing the Robert Gober show together that day in 2014, we toured the permanent collection. He pointed out to me the paintings he regularly revisited. One of them was Matisse’s “Piano Lesson”. In 1962 George had made a painting that was derived from his study of the Matisse. George’s painting contained an actual sound component, a device that made a tic-tock sound and marked time.

Today, in December 2017, it has now been almost exactly two years since George passed away. I was recently given some boxes that were his. Inside, among his lecture slides on Matisse (and Seurat, Van Gogh and others) were some slides documenting his own work and shows. 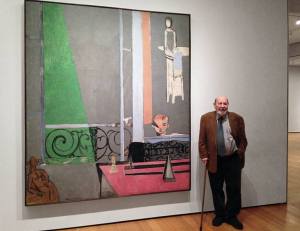