Recently, for no particular reason, I began to go through my photographic archive looking for images of people placed in some way in proximity to art. Some, as in the central image of two women examining a Barnett Newman painting at MoMA, seem engrossed in contemplation; others, like the group sitting in the Greek galleries at the Met, may be uninterested or bored; on the other hand, the young man and woman on the lower left seem less directly engaged with the works in a National Gallery Dan Flaven exhibit as much as they use the environment created by their light as an occasion for play. And on the top left Sonny Rollins plays in front of a Faith Ringgold tapestry of his younger self practicing on the Williamsburg Bridge, something that has become so iconic that a movement has grown advocating the renaming of the bridge after him. Clearly, there now is, and in fact always has been, a wide range of modes of interaction (or not) with art. 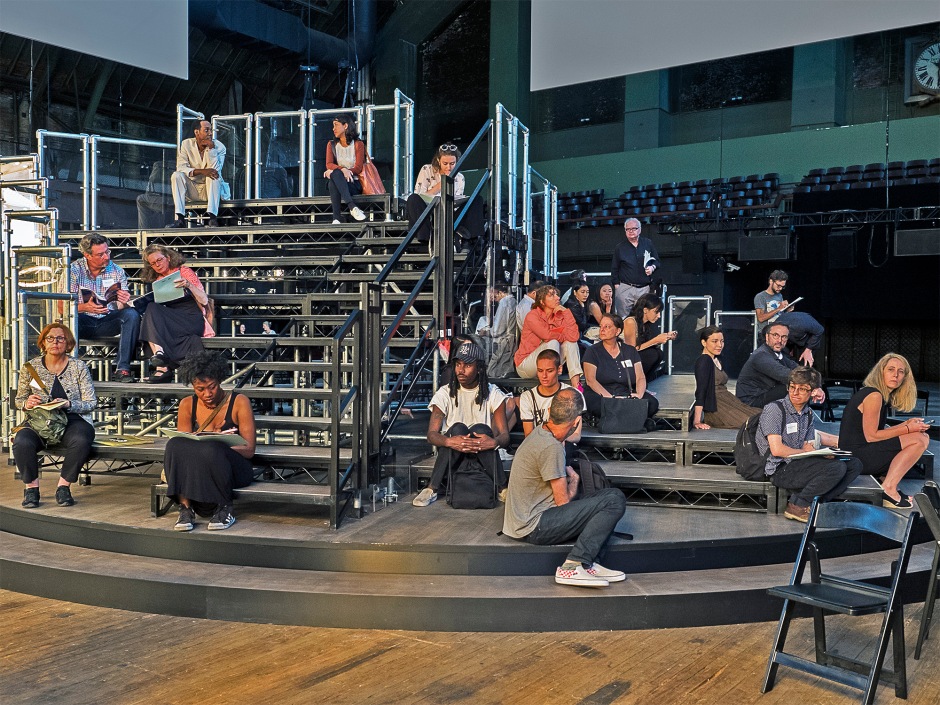 Some of the images that have most interested me suggest the art viewer’s degree of hesitancy, at times confusion, as people come face to face with artworks. This might often be attributed to lack of knowledge or experience, but the image above depicts working critics looking out over the unfolding series of performances, films, musical events, and installation elements scattered over the massive interior space the Park Avenue Armory during the press event for the French artist Phillipe Perrano’s H{N)YPN(Y}OSIS (2015). This, then, is a sophisticated group of observers whose job it is to come to terms with and write about the work taking place in front of them.  For all that, however, their reactions generally seem to be not quite as diffuse as that of the tourists visiting San Marco in Venice shown below (and maybe a bit similar to the scattered attention of the audience listening to a variety of improvised sounds scattered about the similarly expansive space of Pioneer Works in Red Hook pictured above at the top right).

On the whole, this inchoate, diffused, often confused response to art is often the most appropriate one.