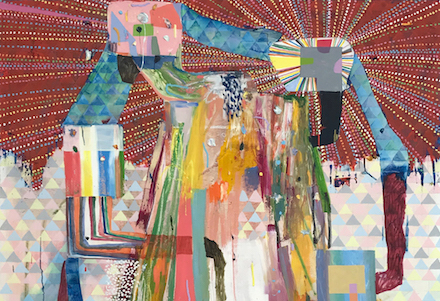 ‘A clammer that one 24-year-old from New Jersey doesn’t think painting is dead.’

Tomory Dodge – born in Colorado, based in California – recently exhibited a great body of paintings at Miles McEnery gallery in Chelsea. His paintings are at once abstract because of their colorful and nonrepresentational nature and yet incredibly directional as well. They each exhibit a propensity for line, grouping and central motifs surrounded by organized clutter. I think that’s all important to point out because I’ve heard in passing about some being concerned with hardcore classifying abstract as work that lacks hard lines and any form of representation. Which I get, but ultimately think it’s a limiting definition for nonrepresentational art. Take Dodge’s  “The Tek” for example. A piece that appears to reference both landscape and iconic imagery with is center-most figure taking on a mountain-like cone, and to the top right an oblong shape from which dotted lines irradiate, making like rays of sunshine. 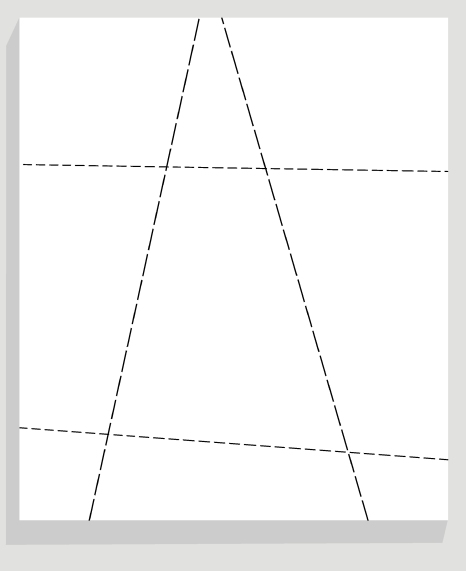 The dark maroon color that is the background of the top third of the image is in contrast to the idea that the area is somehow a representational sky. This is punctuated further by the light colors Dodge used to paint the two bottom thirds of this work’s background. The repetitive use of shapes across the background and different clusters of dots, triangles, or squares also remind me of the kinds of compositions found in some of Gustav Klimt’s works. The central conical figure painted in many stripes of color, all going in the same direction but not really interested in working together.

Another thing I noticed right away is that the piece doesn’t completely eschew the rule of thirds on either vertical or horizontal directions. In fact many of the pieces on display follow a similar approach of maintaining at the very least some vertical semblance of the rule of thirds. Pieces like the similarly vertical “Arrangement” and the square “Orange Figure” also divide in thirds primarily from top to bottom. Not that the precise direction is of utmost importance but the fact that the division is there allows the artist to compose freely and experiment with different ways of layering patterns, color blocks, and textures. 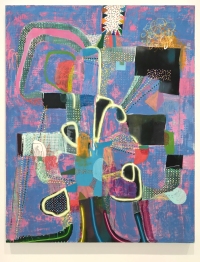 “Amongst Wildflowers” is another example where Dodge focuses his attention to a mostly central abstract figure, leaving in this case, the background of horizontal, primary and secondary color stripes to do the work of filling in the rest of the space with familiarity while everything else he does in the piece seems to work towards twisting that idea. One could say that the blocks of paint covering the center of the piece represent a figure, that the circular bunch of scribbles to the center left are a large rose in hand and that the myriad of color drips and stripes that litter the bottom third of the piece are the wild flowers and their stems. It feels rather simplistic to decide in such short examples that what we have here are artworks whose sum of their parts are greater than the individual elements at play – however, time and again during this exhibition Dodge presents a fresh composition by essentially remixing tried and true compositional storylines and using the edges of the shapes he paints to imply a line where one third might start and another one end.

Where the rules apply less, but to no less success are in pieces like “Booklovers” and “Country Life.” These works seem defined by another compositional approach entirely. Although vertical lines and other hard-edged shapes fill up the space, these artworks don’t seem interested in breaking up the composition with their densely packed variation. Instead the focus seems to cover as much ground with visual motifs like small repeating dots as in “Country Life,” and diagonally facing dashes as in “Booklovers.” Both pieces are busy across the whole piece – not scattered but concentrated to one part. Both pieces exhibit compositions that eschew the general grouping in thirds exhibited by Dodge’s previous works in favor of an all-around approach.

In the example of “Booklovers” the art becomes less about balance and more about the appearance of layered patterns. Checkered dashes atop paint blotches atop vertical yellow, red, and blue stripes. The appearance of the artwork is noisy, like the artist is trying to hide or conceal a faulty composition with an all over checker pattern – but I believe what Dodge is doing instead is presenting a challenge to the viewer – a tour of his capabilities as a painter and whether or not you like these two mostly experimental compositions matter less to him than the fact that he was able to layer together so many spare parts into a visual whole. 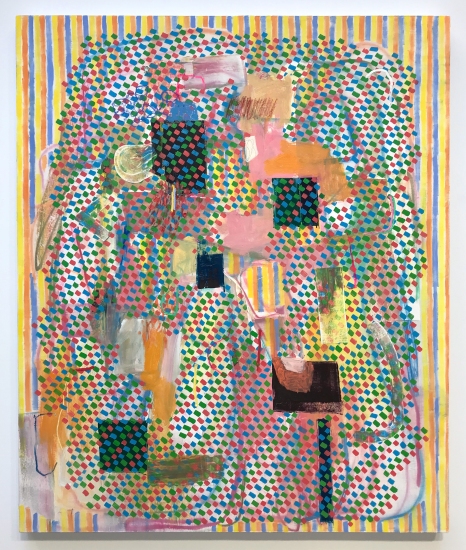 Nowhere do his ideas meld and push past the noise than with the show’s largest piece, and certain highlight “Goodbye Dragonfly.” A wall-to-wall creation using the color black to anchor the majority of the composition but paying nod to each and every other one of his artworks on display. It’s all here: a central mass composed of many separate blotches – hard edges that imply the composition’s been thought through in a studious way and the daring application of both small patches of pattern such as horizontal and vertical stripes like those on the top right corner, as well as an all over pattern, a colorful multi-tone checker, creating the illusion of static and grayscale throughout the piece. Looking at “Goodbye Dragonfly” from far away enough is like looking at an old TV color bar static screen. Maybe that’s why his work was so familiar from the moment I walked into the gallery. ■ 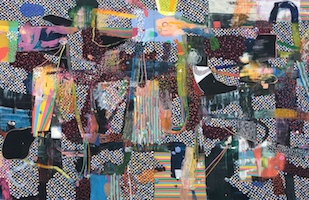 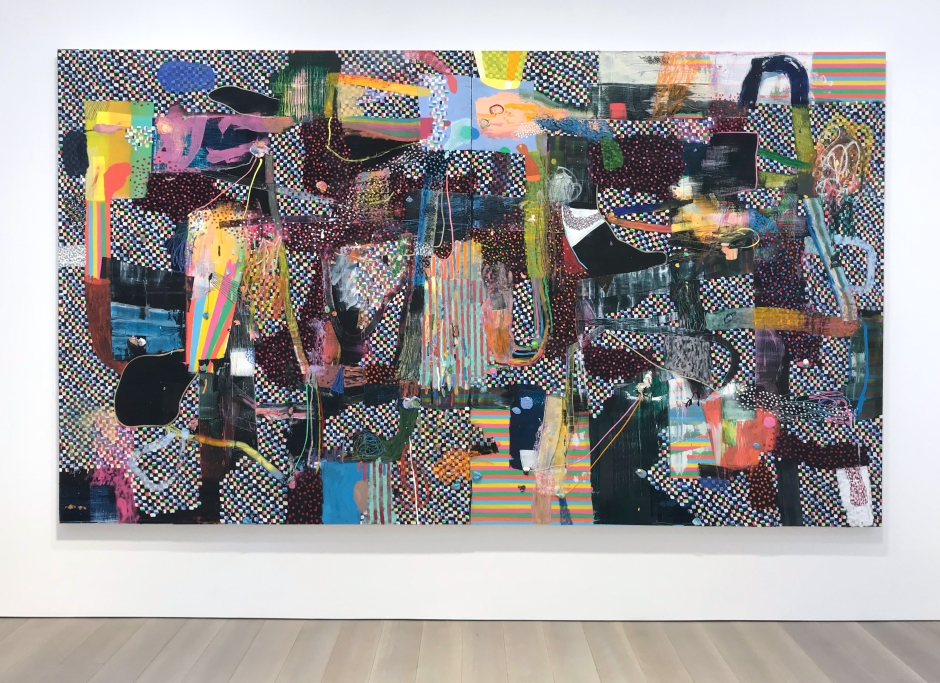