Reading Marcel Proust’s “In Search of Lost Time”, I’m in only the second volume of the multi-volume work.

I probably talk about it too much.

No one wants to hear about someone else’s ecstatic experience.

It just sounds like “blah blah blah”, and people have to discover things for themselves, when it’s the right time for them, if that time ever comes.

Talking about it recently, I think the other person imagined that I was talking about a canonical book (it is that, I guess), but along with that I believe they took it to be something authoritative, mainstream, sanctioned.

They said something about really only wanting to read alternative voices lately (subtext: disinterest in the Proust).

My response, only stated now, too late for that conversation, is:

Their assumption that this book is somehow a channel of dominant culture seems to me fundamentally mistaken.

It’s a really weird piece of art. It is explosively banal. It unpacks and carefully describes things that only you and no one else could possibly know about. It builds beautiful scale models of monstrous social structures. Etc.

(and for what it’s worth, it was written by someone who was an outsider in his own culture and time in multiple ways).

Anyway, that concludes my report. 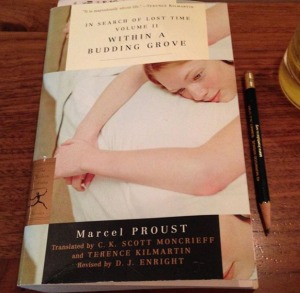