Attempting the art review once again.

A couple of Tuesdays ago I was able to accomplish some February NYC goals I’d been meaning to get to:

• Sold some old CDs and Videogames at my favorite second-hand shop on 45th St.

I got to do all that, and yes, I am now going to speak in length about Zuckerman’s show. “Paper Doll” is an exhibition of works made by Zuckerman that were fist published in the November 2019 issue of Vogue Italia.

Across eight paintings, Zuckerman brought a soon-to-be-released Louis Vuitton collection into her fold. The project’s success is undeniable: I went to see the show with no prior knowledge of its intentions and was immediately struck by the clothes and the fact that these were some of the most model-esque portraits Zuckerman had painted yet. Despite achieving what I think is compositional perfection, her work tends to lean towards the visually chaotic. Several works in “Paper Doll” follow suit, but others present a more streamlined approach that while still Allison Zuckerman to the core are still a significant enough shift to take note. This is true especially of the works leading into Kravets-Wehby’s Back Gallery, where Zuckerman puts figures quite literally front and center with little in the way of carving out a sense of depth. Eschewing the middle ground in favor of striking front and background contrast – flattening the painting – which is not common of her work.

Moreover, gone from these paintings are the far-out and cartoony elements Zuckerman often includes in her work, taken straight from the likes of the original Snow White and the Seven Dwarves motion picture. Key elements that have stayed, however, are the Picasso-esque collage elements, body parts flattened and compressed, taking on the appearance of crude charcoal sketches, or simply replaced by the magazine cut-out versions of a hand, an eye, or a mouth. Also heavily featured in some of the works are Zuckerman’s signature blocks of pixelated squares and repeating square patterns – challenging our perception of what’s in and what’s out of focus.

Not all works follow a template cacophony, however. Take “Flight Pattern,” the very first piece by the entrance door, the one that kicks off the show if you will – it’s nothing if not extremely elegant. It’s practically a snapshot of the mod era with an unlikely background color palette and a sick silver jacket. It’s one of the works where Zuckerman features the clothing front and center, not letting any of her signature painting elements obstruct from view the central silver jacket. Elsewhere in these paintings Zuckerman gives her figures the plein air treatment. In “The Craft” the model is posed amidst pastoral colors as though she is sitting in a field, backgrounded by greenery and holding a cat on her lap. In “Crossing the Alps” Zuckerman’s model is pictured riding horseback as though she is fashionably emerging from a tree portal. It is the largest of the eight works and perhaps the grandest as well, in her sea foam green jacket the model rides atop a muscular steed. Of note is that they have matching haircuts, and this is the kind of detail no other artist would’ve paid attention to.

“Desert Vanish,” the only landscape-oriented work pushes the plein air feeling to full effect. The figure reclines atop a field of stones, behind her an olive-colored sky. My personal favorite detail in this painting are the blades of grass that grace the bottom of the image. Completely saturated and not at all appearing to belong to the nighttime setting of the piece, the grass along with the jaunty hat worn by the model let the viewer know who is in charge of steering this ship.

Closer inspection reveals something else interesting about these works: they are CMYK prints on canvas that Zuckerman then painted over. I mean it’s on the exhibition handout, so it’s no secret, but you have to get up close to the paintings to really understand what this means. In it lies the intention of the entire project. The works, on the whole, aren’t textured. These aren’t paintings about the body of the paint. I believe it’s all in fidelity to the source material and making sure that Zuckerman’s painting style doesn’t infringe on the details but rather envelop the clothes in the narrative of her art. The clothing must not be swallowed by the painting.

This is where the viewer decides for themselves whether the premise the work was created is a valuable one. For those who value artworks that are entirely hand-painted, they may feel like the pieces in “Paper Doll” are tainted by unnecessary digital presence and that Zuckerman is a skilled painter who could’ve created them entirely by hand. On the other hand the nature of the collaboration, and sure enough, probable deadlines, as well as intended purpose of the pieces led Zuckerman down the path to creating digital collages and later painting on those.

I’m personally less concerned about the idea that the artist “cut a corner” in the creation of these works than I am with whether or not they speak to Zuckerman’s body of work at large in a meaningful way and whether success was achieved as originally intended by this body of work. In both cases I think the answer is yes. With the works displayed in “Paper Doll,” Zuckerman remains at her peak, demonstrating she is ever the astute and capable ring leader, creating compositions from enough disparate elements to dizzy any naysayers, not that there are any. After all, this is portraiture unlike any other.■ 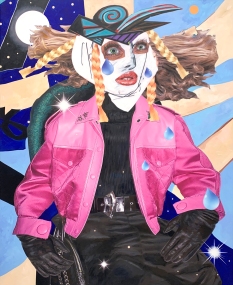 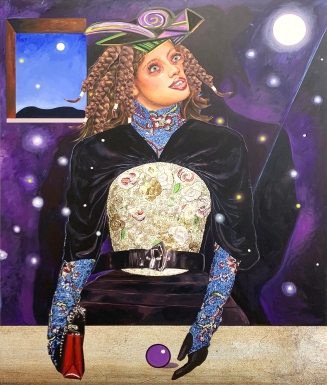