Engaging artists in conversation is something we’re always trying to do at Gallery Aferro, after all our building houses twenty or so artist studios, including my own. As governances and best practices evolved with the spread of COVID-19, Gallery Aferro decided to temporarily close its doors to the public, deciding instead to engage our audience online.

While we sought to use our current show “Glimpse” as a starting point, my mind also went to the many artists in Aferro’s residency program, mainly Ken Weathersby. He has three sketchbooks currently on view at “Glimpse” but I really wanted to ask him about his current work – as Ken and I are studio neighbors. He walks by my work space on the way to his, and in turn whenever  I need to empty the basement’s dehumidifiers or am curious, I step into his work space to observe the work he’s making. It struck me that while maintaining immense technical prowess, Ken’s paintings have taken a turn from dreams and geometric abstraction, to skulls and skeletons.

The agglomerations intrigued me, the dynamic skeleton poses intrigued me, and I wanted to hear about it all, so I asked him several questions about his work and a few other things.

Juno Zago – How has your practice been impacted by the quarantine?

Ken Weathersby – The suddenly changed circumstances (“isolation”, “social distancing”) have been a shock for me, the same as for everyone of course, with all the unknowns about exactly how bad the pandemic will be. I have not been to the studio in a week, which is a loss. I usually go every day. Over the last year or so, I’ve felt incredibly productive, more than ever, with multiple bodies of work going on at the same time. I’m drawing and working out ideas every day at home. Hopefully I can be back in the studio soon with materials, tools and space that I need.

Other impacts have to do with letting other people see the work. Two upcoming exhibitions, a solo show in California based on my almost forty-year sketchbook series and a group show at a college, have been postponed. A third scheduled exhibition, a solo show about my dream paintings at Minus Space Gallery in New York set for this May and June, may end up delayed as well.

JZ – In the row of studios at Gallery Aferro’s basement, yours has been where it is the longest. What’s it been like to see the rotating cast of characters change one and two doors over?

KW – Well, I love being at Aferro, and one of the reasons is the cast of characters. I’ve actually only had two immediate next-door neighbors: Jacob, who played a big part in getting that lower level up set up – he and I worked together to get it built out with walls and lights etc. And since Jacob left… it’s been you, Juno! I appreciate how active you are in your studio, and you are a great neighbor.

JZ – Walk me through once again, your cloud of skulls, where did it come from? And how did it take on its present meaning?

KW – I started painting the skulls in early 2019. For years I’ve had a life-sized model of a human skull on my desk where I teach. One day during class I wanted to do a demonstration of palette knife painting for a student, and picked up the skull as a model. So the first one was made unselfconsciously, not thinking that I was making art. Otherwise, I probably never would have chosen to use that image.

As some days went by, though, I kept looking at it, and thought I’d like to paint it again. As I made more of them, it began to feel like something. It was strange, because it was unlike the more conceptual, abstract, constructed kinds of painting I had been doing for years. There were elements I had not dealt with in my work since the early 90s: chiaroscuro modeling, figure ground issues, drawing from life, representation. It was interesting to find myself unexpectedly involved with those things. At the same time, from piece to piece, I stuck to preliminaries that were there (almost by accident) from the start. There was no breaking up or articulation of the background. The skull just floated somewhere in the middle, so in a way there was no composition. The skull always facing to the left. The whole image was built up with color underneath, but always moving toward gray or black.

There are 93 of the skull paintings and I will want to show them together, in clusters, as they are in my studio. They are most interesting as a group. I find that the color becomes visible, and the variations from one to the next in how they are painted become expressive when they are together. To answer your question about meaning, I’ll say that they are about grief. They are about what we are witnessing now and will witness in the future. 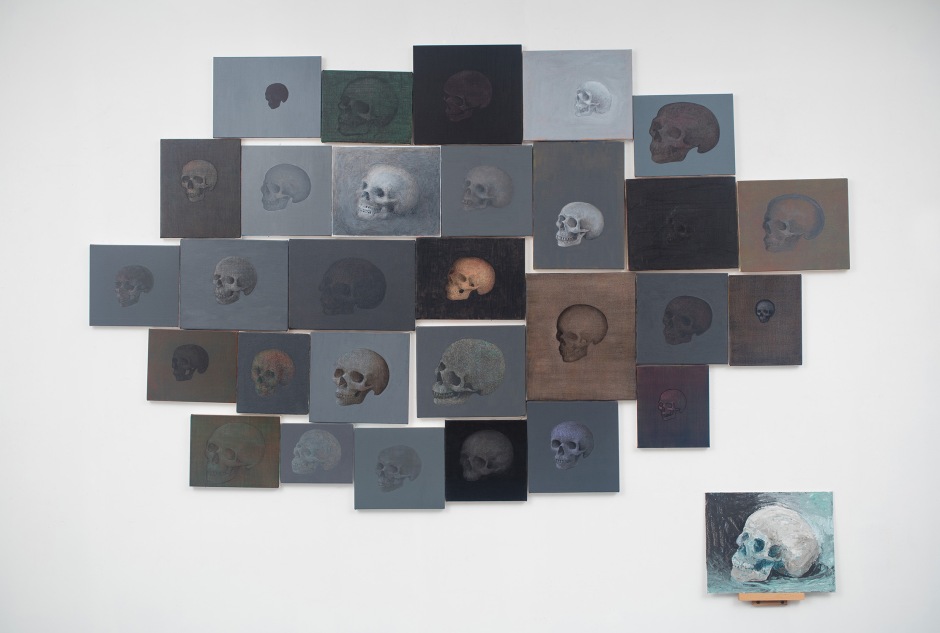 “The Cloud” is 2019, 63 x 84 inches overall, acrylic and graphite on canvases of varying dimensions

JZ – So first came the skulls, and now the skeletons. I see your skull paintings much more as expanding on a still life prompt that took on a different meaning and proportion, whereas the skeletons are much more geometric and dynamic at the same time. It seems like it could’ve been a straightforward thematic progression, but maybe it wasn’t?

KW – The skeletons came from a few different factors.

One is that, looking at the skull paintings in my studio every day, sometimes I saw (involuntarily imagined) some extension of what was there – picturing a neck or even ribcage and arms within the space connected to the skull.  I could sense how that would change the space it floated in.

Another factor was that I built up the grounds in the skull paintings from layers of bright color, layer upon layer with darker tones on top, feeling very rich and muted at the same time. So this evoked for me certain kinds of abstract painting, some particular artists’ work. I thought of Rothko, especially some of his early paintings and also the really late, black ones. I thought of Brice Marden’s dark monochromes. The kinds of paintings I thought of worked with muted, nuanced color on a big scale, so that you could really see it. Even though clustering my skulls brought out the color in an interesting way, I wondered what the things I was making would be like larger. I had this thought but it couldn’t go anywhere at first. When I was a student in the 80s, there was still a holdover from the fifties abstract expressionist era – a cliché of people trying to re-do, or still do Rothko paintings. I love Rothko, actually, but there was something really backwards in that, something unbearable.  So the idea of just painting big, dark color fields directly seemed uninteresting.

But there was another factor – I had this dream. I dreamed that I was doing some figure drawings that were all about proportion in space. In the dream, this was related to something that exists in classical art and art history, which was part of my education. In Greek sculpture the proportions implied in the figures can reflect harmonious, mathematically derived, and geometrically expressed sets of relationships. The height of the legs in relation to the torso, to the head, might express the ratio of “golden proportion”. Also, you might find in a Renaissance painting that the composition is divided similarly, in order to create a sense of both liveliness and unity.

OK, that’s the background of what was evoked in the dream, but in my dream this was being expressed by skinny, spindly figures on a page who posed and gestured with their legs and arms in a way that made their wiry bodies into dividing lines of space. It was a kind of absurd joke on the classical idea, with these ridiculous figures acting out the proportional divisions, rather than embodying them.

That was the key. That showed me what to do with the skeletons. They are dividing, or measuring, or marking the space. At the same time they are marginal to it. They exist on the periphery, dominated by the “nothing” that is the ground, to which their gestures refer us. And that ground, that open territory, can then be abstraction. It can reply to the ground of Rothko or Brice Marden, because in another way it is kind of a joke on all that too. So, as with the skulls, I found my way into being able to use this image which remains one of grief, and can allow myself to because it has its own internal criteria. 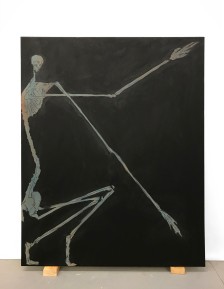 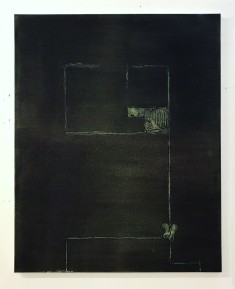 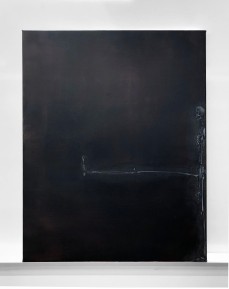 I want to extend huge thanks to Ken Weathersby for his time and generosity. Weathersby’s work characteristically plays with and against conventions of painting’s structure, by cutting out and inverting parts, and most recently embedding photographic images and texts. He has exhibited nationally and internationally, received numerous awards and residencies. He holds an MFA in Painting from Cranbrook Academy of Art. Follow him on Instagram @kenweathersby and his website is kenweathersby.com. ■