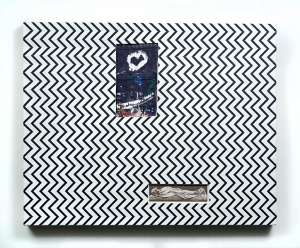 Over the last couple of years I’ve returned to my past practice of writing down my dreams whenever possible.

Much of what happens in my studio, when it is any good, is produced by something outside my deliberation and planning. I am not overtly using chance or unconscious processes in my work, as in historical Surrealism, but the best things often come as a sort of surprise, and involve recognition of something I want in a random juxtaposition or a choice made with no apparent rationale.

Where does this stuff come from? Talking about the unconscious is out of style, and referring to an external inspiration by supernatural spirit or muse is even further off the table. Film director David Lynch used a fishing metaphor and put it in terms of using meditation to access different levels in his 2006 book, “Catching the Big Fish”.

I would like to do something eventually with the dream texts I am compiling, although just being in touch with that side of things may be enough.

For now, here is a list of the opening phrases of a few of my written-down dreams from 2016 and 2017 so far, listed alphabetically:

image: “244”, acrylic and graphite on linen, with collage and denim